With mill-turn machines we usually have more than one way to program an operation. I will show how we can choose which programming mode should be outputted from NX CAM.

On a big mill-turn with X, Y and Z axes on-board we can use standard 3-axis programming mode:

But on most of mill-turns we can’t move X-axis too far in negative direction (down), because we will reach axis limit. Also on machines without Y-axis we can’t program in regular XYZ mode.

To avoid this, we can use one of two following output types:

Depending on how our postprocessor is configured, it might be standard output of the postprocessor. If it is not, we can force it by using Lock Axis UDE. To do this, set options in ude as shown on a picture below: 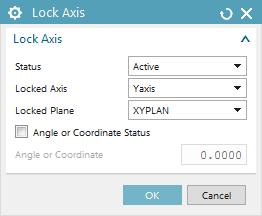 In resulting code, you will get X and C coordinates instead of X and Y:

On different controllers this mode is called differently:
– Transmit – at Sinumerik (Transform Milling Into Turning)
– G112 / G12.1 – at Fanuc
– G137 – at Okuma

This output type is defined in postprocessor. In NX it might be activated by custom UDE, or by attaching an operation to custom method:

You can see how it all works in NX on a following video:

Marek Pawlus
Marek’s focus is development of postprocessors, NC code simulation kits and NX Open applications for NX CAM. In 2016 Marek founded NCmatic in Poland to provide services for NX CAM users. In 2017 NCmatic became Siemens’ Software and Technology Partner. In 2018 Marek launched second location of NCmatic in Morgan Hill, California, to make it even easier for companies from United States to cooperate with NCmatic. Marek graduated from University of Technology in Rzeszow, Poland in 2010 with master’s degree in Mechanics and Mechanical Engineering. While Marek’s area of interest is CAM software and CNC controllers, he also has hands-on experience as CAM programmer in motorsport industry.